Interview with DJ Koh: Head of mobile business for Samsung

As the head of mobile business for the world’s largest smartphone manufacturer, DJ Koh has a decent amount of sway when it comes to the future of our devices.

So when news.com.au was offered the chance to sit down with the tech icon, we obviously wanted to know what consumers can expect from smartphones in the next five to 10 years.

Despite most Aussies upgrading their devices roughly every 2.7 years, most major smartphone manufactures around the world release a minimum of one flagship smartphone per year.

Making things more challenging is the fact these companies are under constant pressure to deliver an overhauled design and new features with every model.

And while smartphones have come a long way in the last 12 years, the future will have much more of a focus on refinement than wild new features and designs.

“I am trying to listen more carefully to what our users expect from Samsung and made conclusions that rather than adding new features and functions customers don’t use, we need to deliver a better user experience,” he told news.com.au.

When it comes to listening to customer feedback, one of the biggest gripes people have with smartphones is a battery that doesn’t die after a morning of heavy use — I’d love to not take a charging pack with me to the footy.

“Long lasting battery is always our dream because most of our engineers are under pressure to develop functions that do not consume too much battery,” he told news.com.au. 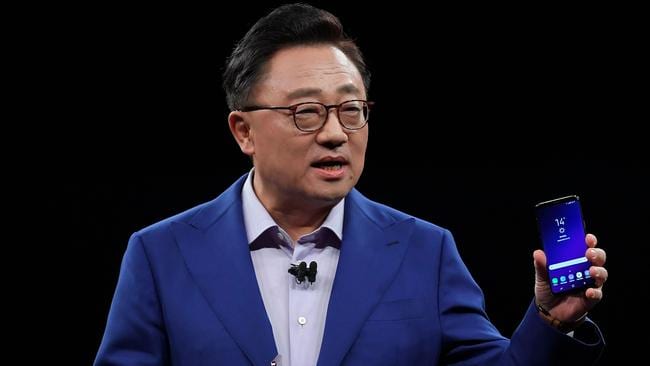 Head of Samsung mobile DJ Koh is a rock star in the tech world.Source:AFP

And while waiting for new battery cell technology to be introduced seems like the obvious solution, Koh hinted there could one day be objects located around your physical environment that would remotely charge your phone — removing your need to do it entirely.

“Samsung is working on that,” he said.

The last five or so years for smartphones has seen a huge focus on cameras and biometrics — fingerprint, iris and face scanning technology.

But in the next five or 10 years, this will make way for the internet of things (IoT) — a network of physical devices, vehicles, home appliances and other items which are all connected and exchange data.

And at the core of this emerging technology will be the 5G network, which is the fifth generation of wireless technology that will make it theoretically possible to download a high-definition movie in seconds.

Koh said in the next decade people can expect to have everything from your fridge, TV, washing machine, lights and vehicles to be connected with each other and not just your smartphone.

“All these stemless connections will be based on 5G as the engine,” he said.

Unlike some other manufacturers, Samsung is focused on having an open ecosystem that will allow the company’s products to connect to those of rival companies.

And at the core of this technology will be virtual assistant Bixby, which the company claims will only become smarter.

“Our AI’s starting point is slightly different from others … today Bixby is a baby, but as time goes, a baby always grows,” he said.

This focus is not only held by Samsung, with LG executive vice president and chief technology officer I.P. Park saying the South Korean multinational was also working towards a similar goal.

Dubbed ThinQ AI, the artificial intelligence system will roll out across the company’s portfolio of appliances including TVs, speakers and airconditioners.

Not only will it allow the products to communicate with each other, but they will evolve over time, learning your patterns and needs.

“Our own AI engine supports voice and video deep learning to make products smarter as time passes,” he said on stage.

Mr Park said the flexible architecture of the system meant LG’s products would be able to communicate with different IoT-connected devices.

“With our open connectivity strategy, we allow various IoT products to exist in the home ecosystem,” he said.

“So you could use an LG fridge to control an IoT product from another manufacturer.”