Declines in the number of owner-occupiers and investors has seen Australian home loan lending continue to plummet.

Figures released by the Australian Bureau of Statistics (ABS) reveal the total value of new loans in March fell 3.2 per cent to $16.9 billion – an 18.4 per cent decline on the previous 12 months.

Despite a 2 per cent increase in the value of new home loans in February, the figures show a downtrend is still very much present in the property market.

The value of new investor housing loans by state (Supplied) 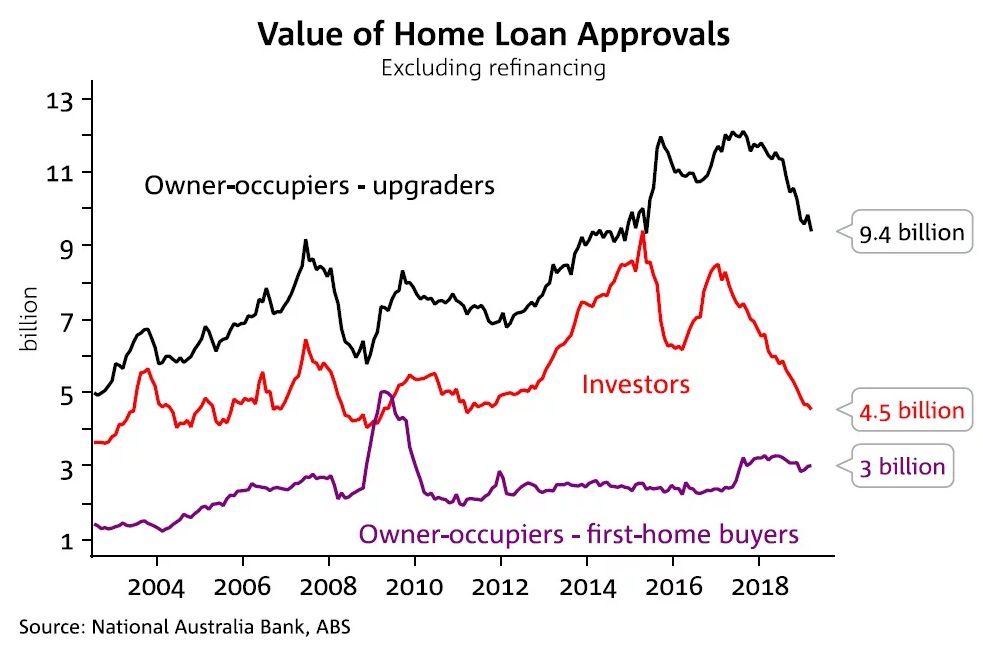 New lending to owner-occupiers also reversed the 2.8 per cent increase from February, falling 3.4 per cent to $12.4 billion.

Compared to the year prior, the total value of new owner-occupier home loans across the nation fell 15.2 per cent.

“There were large falls in the value of lending for owner-occupier dwellings in seasonally-adjusted terms in both New South Wales and Queensland in March, after rises in both states the previous month” chief ABS economist Bruce Hockman said.

Loans to purchase existing dwellings fell 3.3 per cent to 23,513, while lends for newly-constructed homes also declined by 4.7 per cent to 2005.

Investment properties also continued to dive, with the value of new loans to property investors sliding 2.7 per cent to $4.54 billion.

“Nationally, lending for investment dwellings also contracted further in March with the series down 25.9 per cent compared to March 2018,” Hockman said.

“The level of new lending for investment dwellings is at its lowest level since March 2011.”

The decline in New South Wales and Victoria has been particularly acute. (Supplied)

Senior economist at the Commonwealth Bank Kristina Clifton said uncertainty over the upcoming federal election might also be affecting the March results.

“The fall in investor lending was first kicked off by changes by APRA to limit interest-only lending,” she told Business Insider.

“However more recently election uncertainty is likely to be weighing on investor sentiment.

“If elected, the Labor is promising to remove negative gearing and halve the capital gains tax concessional on all but new residential property. This will be grandfathered for existing arrangements.”

Chief executive of investment platform BrickX Kareene Koh believes the findings are more to do with lending constraints than demand to enter the property market.

“This is a clear indication that the recent shift in the property cycle continue to be a reflection of low availability of credit post Royal Commission rather than underlying demand from both first home buyers and investors,” she said.

“BrickX sees demand continuing to grow for our platform as an alternative for investors to access the property market.”

This story first appeared on nine.com.au